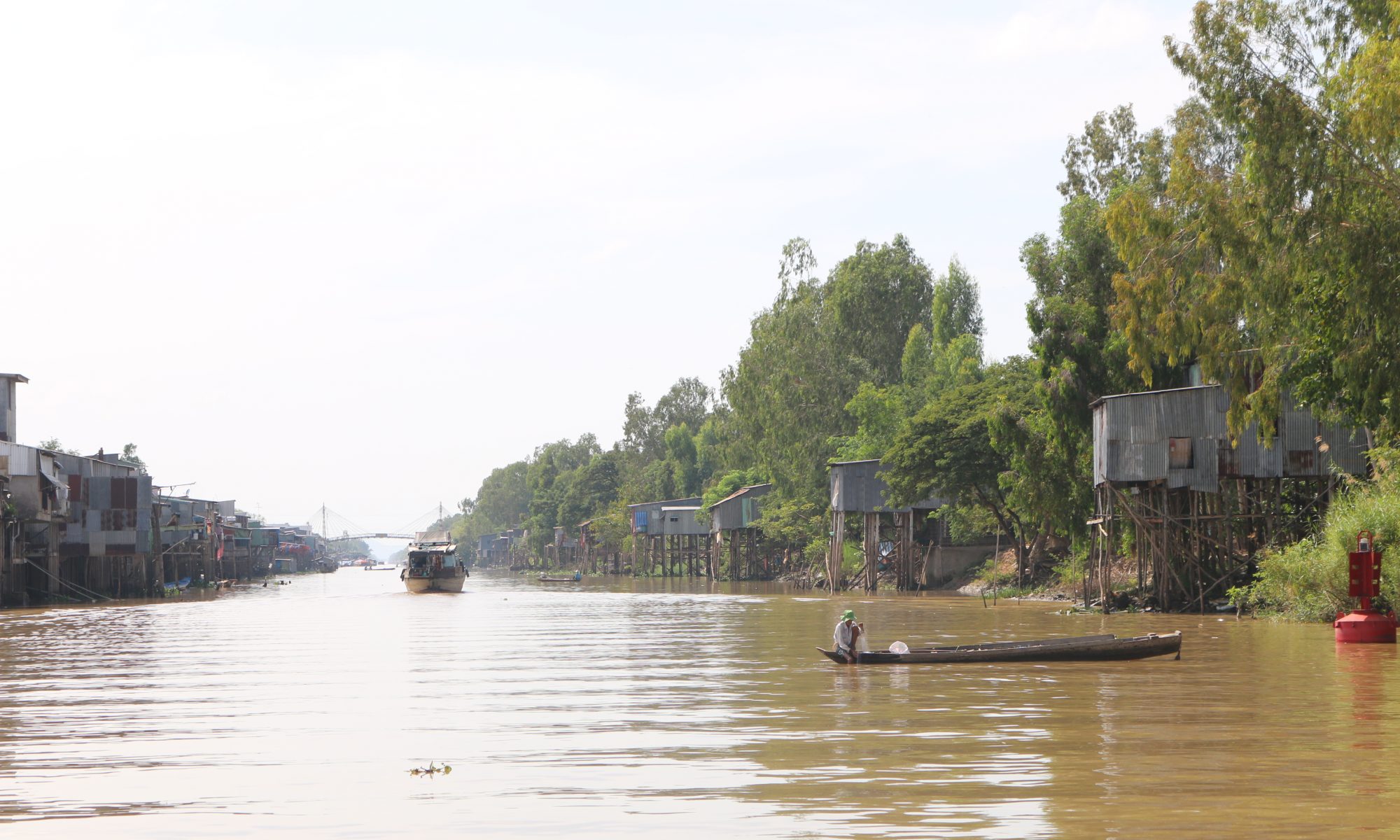 I had the pleasure of co-leading a group of graduate students to the Mekong Delta after having not been in the region for a good seven years. (My second book is focused on the central coast of Vietnam.) It was fun to revisit old sites and see old friends while traveling with the group. Below are some favorite shots from the trip.

I love the above picture for the layers of activity and occupation. Houses on stilts back up into the canal while int he foreground a man fishes from a “ghe tam ban” or three plank canoe. In the distance, a barge approaches us. The water is reddish brown and opaque, almost milky with the fine silt washing down from the Mekong.

The group visited the Cham muslim community’s central mosque. During the visit, one of the imams received our group, and I learned something new.

He corrected me on the history of *his* community and ancestors. They were not Chams who migrated west to the region in the 1700s and later converted to Islam but instead Malays who migrated north and east from Terengganu in Malaysia through Cambodia in the 1700s and finally settled here. Because Cham and Malay are distantly related, Austronesian languages, the Viet chroniclers and imperial officials in the area simply classified them as Cham. The post-1975 Socialist Republic of Vietnam likewise recognizes this community as a Cham ethnic group. One of the students, Nurrhoman from Bandung, Indonesia, communicated some basic phrases with the imam in Malay/Bahasa.

We visited a number of important spiritual sites in the region, including this temple dedicated to the Lady of the Realm, a goddess spirit followed especially by ethnic-Chinese inhabitants at a site that, in ancient times (before 6th century CE) was most likely a temple to Siva or Visnu. Allegedly those who pray to the Lady for good fortune who receive it must return to make offerings of thanks. The money from this return traffic then goes to various charities.

One great aspect of the trip was sharing the teaching with two fantastic scholars, John Agbonifo of Osun State in Nigeria and Debjani Bhattacharyya at Drexel University, and the author of the newly published Empire and Ecology in the Mekong Delta. It is a fascinating read!

We ended our delta trip in Can Tho with several meetings in this booming city. I left it in 2011 at 500,000 people, and now the city has tripled in area with a population of 1.5 million! My favorite meeting there was with an old friend, Ms. Huynh Le, who visited the group and spoke about life in this boomtown.

The trip ended in HCM City on Friday and students gave presentations on Saturday. Thanks to Ms. Hoang for the cute little souvenir! Pictured in the background is “Team Non Lá (Conical Hat)”.

I leave you with a shot from old Saigon, the back of it’s main open air market. I like this shot for the many layers visible here. In the foreground the butcher stalls and flower stands of Ben Thanh. In the background are old facades from the French colonial and post-colonial eras. Then in the way back are the towering spires of recently completed skyscrapers. Farewell until next time, Vietnam!